The Girl with the Black Mole

Posted by Arwa Salah Mahmoud in Bids of Fiction on July 11, 2015 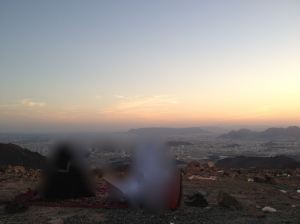 “Wake up, Mama. It’s your appointment today. Should I open the drapes?” Laila could see the luminescent figure of her son glide across the room as he reached for the curtains. She rolled in bed and rubbed her eyes, trying to cover them from the expected sunlight, but no sun came through the room. The drapes were still shut.

She struggled to sit up, slid her feet into her slippers, staggered to the bathroom and stood at the sink. She avoided her face in the mirror and focused on the water slithering through the protruding veins of her hands. In her mind, the older she got the more useless she felt. She longed for the time when she worked as a primary school teacher back in the seventies. At that time she felt invincible, a feeling that was fed with the trembling insides of her students. Each time she walked into the classroom she could almost hear their little heartbeats racing. It was like a farmer walking into the barn to pick out the next animal for slaughter. It always exhilarated her, but only until she had to look that particular little girl in the eye; a girl that used to sit at the back of the classroom.

That girl was the quietest of the students; she never tried to appeal to Laila with flowers or candy like the others. She was shy and frail and her hair was pulled back with a long braid that always seemed to have been done the night before. Her large features seemed to crowd each other on her small face, and on her left cheek was a black mole visible from a distance. Laila had no tolerance for her silence, it made her feel observed, watched. Each time she walked into the classroom she commanded the girl to come sit at the front, and the higher Laila’s voice became with the succession of commands to the girl the wider the girl’s black eyes opened and the longer she stared back. There was a terrified innocence in the little girl’s eyes that threw Laila’s brutality right back at her.

“I know what she is,” she had told Akram, her son, one day as they were having dinner, “she’s that demon that breathes in my neck every night. I know he takes possession of her whenever I walk into the classroom. He tries to defy me through her.” Akram had breathed a sigh of frustration and looked at his mother with a mixture of sympathy and disappointment. “That demon again, Mama? Why do you let your mind wander to those things?” He reached across the table and put his hand on hers. “It’s just bad thoughts and mind tricks.“ Laila became cross at her son’s words, but when she turned to reprimand him his gentle smile crushed all the negativity within her and she crumpled into a smile. At the age of seventeen he had already grown into a man, with a radiating confidence that made him assume a larger sense of responsibility than most young men his age. Encouraged by her ease, he presented his plea once more: “How about if I come with you to the psychiatrist? I promise you no one will have to know.”

As Syrians living in Riyadh, Laila felt constrained by the closely tied, conservative Levantine community even though she was far from home. What would they think? That she had gone mad?

On the day of her first appointment with the psychiatrist Laila went into Akram’s room to wake him up. The appointment was less than an hour away and she was surprised that he hadn’t woken up or prepared breakfast before her the way he always did. As she stepped into his room she was unsettled by its heavy stillness. He was lying on his side with his back to door, so she called his name twice as she walked towards him, but the cold touch of his stiff shoulder was the only answer she got.

Laila refused to accept the loss of her son; he became the only luminescence in her otherwise dark apartment. “You never believed me when I told you about those demons,” she told his figure one day as it slid past her while she was making her tea. “They didn’t kill me, Mama,” he repeated, “It was my time.” But she was never convinced. On the first day she went back to teaching after her son’s death she walked into the classroom and scanned the back row for the girl with the black mole. As usual she signaled for her to sit at the front, and for the rest of the class she was on a vengeful engagement with the demon who killed her son, firing questions at the little girl – a sly pretender in Laila’s eyes – tapping violently on her desk when she hesitated with an answer, until her golden moment came when the girl failed to present her homework. Her palm struck the girl’s cheek so violently she threw her off balance and dislocated her jaw.

Laila was very lucky to have just been laid off work, her colleagues later said. Had the girl been the daughter of some prince Laila’s residence permit would have been withdrawn and she would have been forced to leave the country.

For the decades that followed Laila turned to private tutoring for adults. She had grown accustomed to her life in Riyadh and bit by bit lost all connection to her family at home. Her dark apartment became her abode of familiar loneliness, lifted only by her son’s visits, except that not all the visits she got were from her son. Over the last two years she had exhausted all her efforts to get rid of the sinister presence she felt. She had recited the Quran numerous times and burned as much incense as she could. The sounds only became louder, the breathing in the night closer. Eventually she decided to fulfill her son’s wish and see a specialist. Perhaps it really was just her mind.

On the morning of her appointment she arrived at the building a few minutes early, and just as the elevator was closing another woman rushed in. The woman’s face was almost hidden behind the burqa she was wearing, but Laila could see the woman’s eyes. Wide, black, compassionate. She could tell through the eyes that the woman was smiling at her. Laila didn’t return the smile and quickly turned her gaze to where Akram had been standing, but he had vanished. She kept the stiff expression on her face as she stepped into the clinic. “Have a seat, madam, the doctor will see you in a minute,” said the receptionist.

When it was finally her turn to go in she wiped her sweaty palms on her abaya and walked towards the consulting room door. Akram was standing ahead of her, smiling reassuringly.

“Madam Laila, pleased to meet you,” the psychiatrist greeted her as she was closing the door behind her. Laila could see that the psychiatrist’s eyes were the same eyes that had greeted her in the elevator. And without the burqa, she saw the black mole on her left cheek.

Posted by Arwa Salah Mahmoud in Bids of Fiction on July 9, 2015 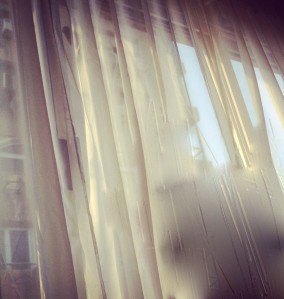 Carla loves Frank, but Frank loves his wife. Although she had been aware of her limitations, she had thought that when the final barrier was lifted he would turn around and realize that she was his only true love.

One day when he was taking a shower, she slipped into the bathroom and wrote him a love note through the steam on the mirror. When he saw the note he smiled warmly and walked to his wife while she was chopping cucumbers and hugged her from behind. “You tread so softly, my love,” he whispered in her ear, “I can barely feel you walk into a room.” Carla watched everything, and when a gush of agony ran through her the knife cut through his wife’s finger and they both gasped in one breath. She was aghast. They had united even in pain and responded as one.

And for six years it continued like this. No mirror notes, no soft breeze ruffling his hair in a room of closed windows, no broken china and no midnight footsteps in the attic could transmit Carla’s emotions to Frank. It was only his wife who could hear the footsteps. It was she who was certain that the teacup was too far from the edge to have just slipped over it the way it did.

Frank didn’t notice any of this. His wife lived in fear, but he lived in love.

Within the last year Carla began to think that if she accepted his wife’s presence she could use it to her advantage. Perhaps his wife could be the means to deliver Carla’s love; she could be the vessel.

The first time she tried his wife’s body jerked on the bed. Frank woke up startled and looked at her. She was staring at him with a glassy look in her eyes, so he reached and took her in his arms to comfort her. Carla was elated. This was the first time for him to look at her directly, so she wrapped the arms around him and buried the head into his chest.

On those nights it seemed they would never part. Gasps and moans and sighs and sweat… The days became calmer, the china ceased to break, and there was no more footsteps in the attic. Carla gave the wife back the days and took away her nights, hoping that on those nights, at least on those nights, she could be united with Frank.

But on that last night Frank had called out his wife’s name, snapping her back to reality. His wife’s arms then pushed him away and her body got out of the bed, ignoring Frank’s calls from behind. Carla’s happiness had switched to pain. She could no longer bear the jealousy nor could she bear the lie. If Frank was to ever become her own, his wife had to go, even if it meant that she could no longer feel his touch.

The wife’s steps continued to the kitchen. Now they became faster, steadier. There was the knife lying on the counter, waiting to break the spell and bring on honesty and salvation. By the time Frank reached the kitchen the knife had penetrated his wife’s throat. His scream of anguish expelled Carla to the corner of the room. She was standing in dismay, watching him pull his wife to his arms, when he suddenly raised his head, his eyes shot at hers, and bellowed “WHY?”