Friday of Anger: The Birth of a Revolution (Part 1)

Burning cars and a smokey skyline were scenes that were first spotted in Suez.

The night of the 25th was like a surreal dream. People gathered in Tahrir after the protesters had taken hold of it. Groups of musicians, artists, poets, all gathered around in circles and expressed their demands in their own ways. Tahrir was a beautiful festival with Egyptians of all kinds, all backgrounds, sitting together shoulder to shoulder and demanding freedom. But it didn’t last for long. At 1 am some 60 tear gas canisters were thrown into the square to disperse the protesters. Suddenly the festive atmosphere became a spectacle of panic. As they tried to leave the square escaping the tear gas they were arrested and taken off the scene. The whereabouts of many remained unknown for a long time.

And from that moment on in the following days panic was the overriding spirit I could smell in the air. I live near downtown and Tahrir, and I could hear sirens of ambulance and police continuously ringing day and night as if it was the government’s final calls for dear life. Some of my friends who had stayed late in Tahrir on the 25th were now caught up in a friend’s apartment in a building that overlooked the square, but they were unable to tell me where they were on the phone. There was no chance for them to try to reach their homes because the police was frantically and randomly arresting anyone in the vicinity of Tahrir. They also spotted female police officers with sticks, ready to harass female protesters. So there was a little something for everyone. No one was to be ruled out or spared.

During this time things had begun to escalate by a hundred more degrees in other towns, especially Suez, a city whose people we always praised as brave resistance fighters one generation after another. The city has a long history of being the main battle front for most of the conflicts Egypt has gone through. Reports of live ammunition being used against the protesters were already reaching us, faster than those of similar incidents inside Cairo. The more the reports flooded the angrier everyone felt, and the more escalated the determination of the protesters became.

In only two days over 20 people were reportedly killed in Suez, and we are used to always doubling the official number announced. The families of the victims were requested to sign forms that denied the actual reasons of death by live ammunition in order to receive the bodies. They refused to sign and staged a protest outside the morgue, becoming the center of attention and inspiration to the rest of the country, igniting further flames of anger and determination. What began as a call for political and economic reform now became a full demand for the fall of the regime. No one was going to ignore what happened in Suez. Facebook, Twitter, and SMS were some of the main mobilizing techniques, which led the government to eventually block all three services from the country.

Soon a call for a massive protest in every street and every town after the Friday prayers spread like wildfire. A list of mosques in different parts of each city was issued and I, along with a number of friends in Cairo, decided to begin our march from Al Azhar mosque. The protests had never reached this size and magnitude before, and they had never lasted for more than a day. I felt that history was being made, that some profound change had already started to find its way in, I could tell just by the non-stop sound of the sirens I could hear even in my sleep. For that reason we chose Al Azhar, known for being an epitome for defiance throughout Egyptian history.

We made sure we agreed on time and place the night before Friday. By then we had no SMS service and a troubled internet. We woke up the next morning expecting the worst, and we got it. The first thing I tried to do was switch on my mobile phone. There was no signal. I went to the computer and found no internet. It was as if I had jumped into a time machine with my gadgets and woke up in another point in history.

Egypt was back to the middle ages.

If there was anything signifying that the end of Mubarak was near, it was these moves by the government. The more it sent out those signals of its own panic the stronger everyone of us felt. And that is how I felt as I closed my laptop that morning. Every step I took now counted. I felt I was walking, marching, sometimes running to freedom. Quite literally.

My friend Nadia was staying at her father’s place, a ten minute walk away from mine. She opened the door and as I walked in I found her sister closing up her backpack while two of her friends waited. They had decided to begin the march from another mosque. They calculated that it was in a large square with wider streets surrounding it, making it harder for the police to crackdown and control the crowds. I could see the logic, but our attachment to the idea of starting from Al Azhar anyway did not wither. We were willing to take our chance. 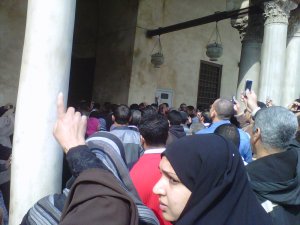 The first minutes of the protest. Immediately after prayer, protesters begin their chants as they leave Al Azhar mosque.

Nadia’s father, a 73 year old retired university professor, looked at us and said. “Go bring that dictator down. I wish I was able to go with you, but I’m too old now.” His words came to all of us like a brand new rush of excitement as we walked out the door. Few parents in Egypt, at this day and age, would encourage their children to go out and protest in the midst of imminent danger. But Nadia’s father is an old patriot and activist who has seen better days in this country.

With the mobile network shut down, our goal to stick together and try as hard as we could never to lose sight of each other was almost as important as the reason why we participated in this protest. Should anything happen to one of us, the others would know and hence have a thread to follow in finding that person.

We arrived at Al Azhar mosque a little before the noon prayers began. The entire area surrounding the entrance to the mosque and across the street into the old Khan Al Khalili market was covered in plain clothes policemen in dark sunglasses and mobile phones staring around doing nothing, intimidating everyone by their mere presence. Others in uniform seemed to be of high ranks. They held their buzzing walki talkis and stared back at everyone who looked at them. News of random arrests had been spreading like wildfire and the last thing we wanted was to raise suspicions around us before anything even started. Nadia was all set for tear gas and rocks with a helmet and vinegar in her backpack. Upon our first entrance to the market to buy some water and snacks our bags were checked.

“Are you a construction engineer?” Asked her an officer with a smile. “Yes.” He had said the lie for her. She couldn’t really tell him she was equipped for a revolt. Yes was, after all, a word the police always liked to hear.

We walked right past the plain clothes officers and we were inside the mosque. A foreign journalist had put on a hijab and placed herself among the women worshippers, taking random pictures, wanting to capture the first spark. It was hard to suspect in anyone that they were going to participate in any demonstration. The men and the women looked perfectly calm and normal upon their entry into the mosque. Most people tried to avoid looking around them like we did. I was too excited to hide anything, especially when I was inside the place of worship. I took a far end corner, leaned against the wall, and stared at everyone.