Part 2: Sagarmatha Lets Me In 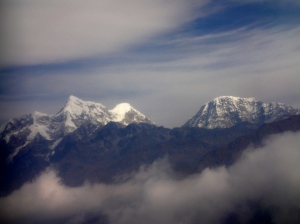 First sighting of the Himalaya tops through the plane window

Another boring day in Kathmandu airport. This time I decided to explore boundaries and see outside the waiting hall. I followed a barely recognizable stairway and found myself in a small restaurant overlooking the hall through glass. There were couches, but not a single one of them was empty. I felt my joints tremble longingly each time I looked at them, so I decided to turn around, sit on the dining table and order some food.

Soon I found another mysterious stairway leading to an upper floor. On my way towards it I ran into a closed door with a sign that read “Information Public Announcement Office” with a small window. I peered through and there she was! Annoyingly loud and repetitive announcement lady who defeated the whole purpose of getting people’s attention by repeating each announcement 5 to 7 times, making us all resort to blocking our brains to the noise in defense of our sanity.

I turned around in despair and went up the stairs to the roof of the airport. I was so bored I began to suggest to Amr and Hany, the remaining trekkers in our group who still had hope they would go on the original trekking plan, to join me in a jumping game I was so passionate about when I was a kid.

Oops! There goes my first girlish mistake in the pan-man company I was in. From the look on their faces I felt like I was asking them to wear tutus and dance with me.

Time went on on the roof. I was beginning to contemplate alternative options Omar had begun to suggest to us for the trip. My dream of going to Island Peak was withering away. I began to look forward to another lower peak where we could still learn about technical climbing. I had been lobbying for the idea and trying to convince Amr that he doesn’t have to go higher than Kilimanjaro specifically on this trip when suddenly Omar showed up and called for us to follow him. As we went back into the hall a miracle was unfolding before us. Most of the people were moving towards the gate and announcement lady was now pleased to announce the “departure” of our flight to Lukla!

Sagarmatha had finally approved of our entrance.

It took four days of waiting, thinking, inventing options and examining alternatives to be able to finally reach Lukla, which marks the beginning of the Khumbu route to Sagarmatha, or Mt. Everest. All I had wanted was to look at that mountain, to breathe in the air that surrounded it, to see its people, the Sherpa whose sharp features had been shaped by its majestic edges.

My mind was overwhelmed with awe at the Himalayas and everything that they stood for. It was like seeking permission to see an unreachable throne surrounded by a mighty fortress. My friends and I would always say that to summit a mountain you need permission from the mountain to climb it.

On that day I discovered that I needed permission from Mt. Everest just to see it. 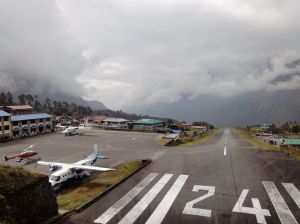 We boarded a little noisy plane with one seat row on each side. I was looking out the window at an enormous landscape of mountains reaching up to the clouds. As we got higher I began to stare at the clouds and expect to see snowy summits penetrating them. Nothing was showing. I realized then that I was looking through the wrong angle.

Way in the distance, so many feet above the clouds, there were the sharp, aggressively beautiful high summits of the Himalaya with all their cliffs and edges. They appeared to be rising above every mountain there is, like royalty looming in the horizon with the most beautiful shades of white I had ever seen. I felt a wave of bliss run through my veins. I was approaching one of God’s most sacredly beautiful places. I was accepted. I was entering the Sagarmatha domain.

With around 100 m of space for our plane to land, we reached Lukla’s suicidal runway which sits on a mountainous cliff rising to 2860 m above sea level, and immediately began our trek to Phakding, our first stop for the night.

I could barely recognize myself on this trek. This was not the body or mind that climbed Kilimanjaro two months before. My body was slightly overweight with dormant muscles. My mind convinced me to carry a ridiculously heavy backpack and forget the poles, and I was faced with an almost continuously downhill, steep, and muddy trek–my ultimate nightmare.

Yet the further we went down the route the more excited I became for how different everything seemed to be from Kilimanjaro. I was really getting a brand new experience. There were villages everywhere we went, Sherpa going about their daily lives, yaks carrying loads and wearing bells to alert us to make way for them, and a continuous, soothing river that had a mysterious shade of light blue we never managed to fathom.

Hellos and namastes were in the air as we kept running into people coming from the opposite direction. Trekkers, guides, and villagers alike seemed to always be fresh and happy. I tried hard to focus on the atmosphere around and quiet the nervous, unconfident, and worried voice inside me that was already beginning to complain from aching knees and an uncomfortable back. I was in the footsteps of Edmund Hillary and Tenzing Norgay as they began their long journey up Sagarmatha, and that was all that should matter then.

That amazing sound of water coming from the river is right outside the window as I write. It feels like a constant attempt of nature to soothe me. But here is what I’m thinking: If there is any test to the mind over body theory, I think that this journey is it. I have no body to bet on this time. It’s all up in my head, and those tyrannically negative thoughts really need to stop.

This entry was posted on December 7, 2010, 10:05 am and is filed under Travels. You can follow any responses to this entry through RSS 2.0. You can leave a response, or trackback from your own site.