The Arab Initiative: A Mental Exercise

Posted by Arwa Salah Mahmoud in Features on December 26, 2008 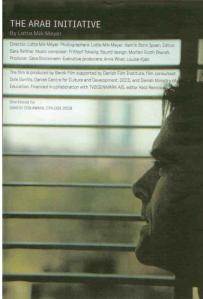 “We must find a place for you to take out your gum,” says a Danish scholar to his young daughter as he holds her hand and enters the castle of Christiansborg in Copenhagen, “Maybe in the cloak room.”  The scholar is about to receive an honorary award from the Queen of Denmark for his work in the Middle East.

A sophisticated yet humble man in his forties, Jakob Skovgaard-Petersen is a Danish scholar specialized in Islam and the Middle East.  He was appointed as head of the Danish-Egyptian Dialogue Institute in Cairo as part of the Danish government’s post-9/11 project to further engage in the Arab world, shifting its focus from rural area activities to a more politically oriented engagement.  This project was named The Arab Initiative, and so is the title for the recent Danish documentary directed by Lotte Mik-Meyer of the Danish Film Institute in Copenhagen.

Following Petersen’s work for four years, The Arab Initiative presents a new attempt to penetrate the confused world of cultural misconceptions and emotional perception, shaking the ground under the viewers and forcing them to revisit themselves in order to understand others.  It is an honest depiction of the work Petersen had set himself to do when he altered the life of his family by traveling thousands of miles to a foreign culture, armed only with the firm belief in dialogue as the mechanism of change.

Through this depiction, however, the film acquired a spirit of its own.  It takes the viewer on a one hour journey through the complexities of life in Cairo, showing the many faces of its diverse manifestations of Muslim life.

“When I started this film in 2004 I wanted to counter the one-dimensional picture of dialogue, and the fearful picture of Islam and the other,” explained Mik-Meyer.  In this attempt Mik-Meyer has deconstructed the single, flat image of Islam as one group of hateful think-alike Muslims.  Arguments of Islamist intellectuals and political activists boldly presented the multiple dimensions of the Islamic outlook to dialogue and Muslim perceptions of the other.

On a softer and more silent note, she has lifted the veil off the Muslim woman of the “mysterious orient,” showing her rushing out of the bus to work, dancing on a boat adrift the Nile despite her headscarf, taking charge as a central figure in a family, and voicing her thoughts on what she perceives dialogue with the West to be.

Shot during a turbulent period in Egypt’s political history, the film rightfully focuses on the political makeup of Egyptian consciousness.  Recurring scenes depict young men cheering or holding up signs of candidate names in preparation for the parliamentary election.  More importantly, policemen and guards are shown at work or simply trying to catch a bus, a site hardly encountered in the streets of Copenhagen yet very vivid to Egyptians as a constant reminder of state presence and authority.  The film carefully reflects uneasiness in the relationship between the people and the state, thereby enforcing a consideration of the multiple dimensions of public Muslim attitude in order to understand Muslim outrage.

Mik-Meyer has successfully done the same on the Danish side.  She exposes the internal debate within Danish circles and voices the concerns and questions many have regarding Muslims.  Through her main character, she challenges the Danish viewer on a new level.  “I chose Jakob because he does not have the typical, often disdained look of what many here call ‘Halal Hippy’ when they speak of those who sympathize with Arabs and Muslims,” clarified Mik-Meyer, exposing the internal challenges she deliberately chose to create.  “Jakob has the look of the intellectual bourgeois, very much respected in our society.”

Since the publication of the controversial cartoons defaming the prophet Muhammad in 2005, most attempts at bridging the ever-widening gap between Muslims and the West have been as complex and elevated in expression as the issues themselves.  The Arab Initiative, however, offers a more subtle, utterly humanistic approach to the problem.  It enters Petersen’s home and shows conversations with his daughters.  It silently exposes the inner difficulties his wife encounters in a foreign society, having left her stable career in Denmark in support for her husband’s mission.  The viewer is thus engaged in a human story, not faced with concepts and analyses thrown from speakers on both sides.

“The film is quite healthy,” expressed a Danish 21 year-old student of Folkehojskole (Folk High School), a non-degree college offering optional post-graduate education, “It really unsettles the comfort we feel in framing ourselves and others in a simplistic fashion.  It challenges such single images so hard it is in fact annoying!”

“The wife in the film must be expressing exactly what the wives of immigrants here in Denmark could be encountering too,” added Mik-Meyer.

The film presents the viewers with the concept of dialogue as a continuous endeavor, a way of life taking a special form in the choice made by the main character.  In the process of watching the development of the work of Petersen, a viewer is presented with a mental exercise, one which forces them to cast aside their own cultural background and beliefs and step into the shoes of the other, viewing the world through their eyes and judging by their standards.  Alarmingly to some yet comforting to most, it rests on the basic fact that raw human emotions, dreams, and fears, are shared by all sides.